Raising H-1b cap will accelerate loss of U.S. jobs and technology to India 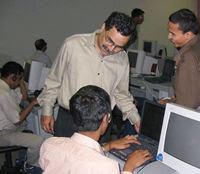 "It has become the outsourcing visa," the Indian commerce minister, Kamal Nath, said by telephone this week while attending global trade talks in New Delhi, at which India is pushing the United States for a larger H-1B quota.

Last year eight of the 10 largest H-1B applicants were outsourcing firms with major operations in India. U.S. SEC filings reveal that Infosys alone had 6,800 U.S. employees on H-1Bs as of September 2006. In 1998, the figure was 231.

Tata Consultancy Services sent Atul Pevekar to Minnesota on an H-1B. His assignment: to work with a U.S. retailer to relay its information technology needs back to TCS's Indian staff, to which the retailer has outsourced scores of jobs. "I am a link between the people who are doing coding in India and the client."

Losing jobs and technology to India is not in the best interests of the U.S. or of U.S. citizens. Congress needs to suspend the H-1b program now.
Posted by Mr. Kim Berry at 1:07 PM

Here's another factor in job loss: India's new-found wealth from outsourcing is causing them to buy companies overseas. In how many of these cases will the incumbent Americans be displaced by their new owners? Here's one to watch, note the hopeful optimism of the American manager: http://www.spokesmanreview.com/breaking/story.asp?ID=9608

Frankly, how long they are here doesn't matter to me. At least they are paying taxes and buying services. My concern is that my job can mostly be done remotely and I am being replaced by someone who sits in a chair in india and makes what, a few dollars a day? They pay no taxes. I am an american taxpayer about to be jobless.