In her commentary New threat to skilled U.S. workers, Froma Harrop explains how the H-1b visa is facilitating the transfer of up to 40 million high-skill American jobs to other countries. "Princeton economist Alan Blinder predicts that these choice jobs could be lost in a mere decade or two." She gives Ron Hira more than the sound bite that H-1b opponents are typically allocated. She closes by accurately implying that Kennedy and McCain are liars. 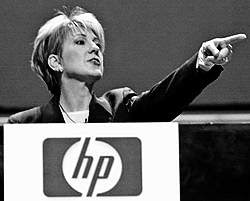 Former HP CEO Carly Fiorina’s position on shipping millions of U.S. jobs overseas is clear - as she was laying off thousands of American workers - and exemplifies the vision of many U.S. CEOs:

"There is no job that is America's God-given right anymore," Fiorina commented in a recent speech in Washington. Not the most sensitive comment to make in light of the number of unemployed Americans suffering these days. This Marie Antoinette-inspired remark makes me wonder if HP hasn't already offshored its public relations department.

"We're trying to move everything we can offshore." - HP Services chief Ann Livermore ... HP figures a good high-end programmer in India costs about $20,000 a year, about a quarter the U.S. cost. And things could get even cheaper. "We see China gaining on India about three or four years from now."

America just ain't like it used to be, there's no doubt. They've taken away (the last quote I read, cannot verity) over 3 million factory jobs. A lot of these were small, localized furniture, textile, and tobacco factories. Oh, forgive me, I forgot that the loss of tobacco revenue is considered a blessing by those in the know. Now China makes cigarettes like they're is no tomorrow, sells them to any and all and reaps the profits, including counterfeiting US brands. I know, I helped teach 'em how to build, install and operate the equipment because Americas elite decided it was evil and the tobacco cos. saw the handwriting on the wall. But back to the loss of the small local factories & shops; many of these were located in small towns all over America and their disappearance wasn't as noticeable as several thousand jobs lost at HP and similar large lay-offs due to foreign job export. But I promise you those losses of little shops & factories hurt this country something fierce, but who was there to protect them? All this started some time back and if we had banded together as Americans to try to stem the outflow early on, perhaps IT workers wouldn't be in the position they are facing now. But we kept silent, and either didn't care or figured it would never be aproblem for us since we were so necessary in the 90's. Folks changing jobs any old time they felt like it, demanding and getting high salaries which may or may not have been justified; think about how we acted in the 90's. Yes, I know there were many responsible folks as well, but IT workers got a reputation then that still haunts them to this day. Anyway, we did it to ourselves by not starting early and keeping on top of what was happening. We have become so compartmentalized in our mentality in the US that we have forgotten how to act in a manner where we as large groups of voters can get things done. Of course it has always been hard to get folks on to certain causes, and getting them to stay on course has always been even harder, but for some reason it seems as though now it is tougher than ever; perhaps we lack the leaders that can organize and hold together large groups of effective Americans that can get things done. Or maybe things just ain't bad enough yet; I sure hope they don't get that bad. I remember the late 70's and they were rough, and I'm sure a lot of folks have memories of certain times in the US that weren't so good. Well, I've rattled on enough, probably bored millions to tears. Thanks, God Bless America. Das Kriegschwein72.

I too remember the 90s, and many people in IT jobs that should've gone somewhere else, but it was so HOT. We are indeed haunted by a reputation as spoiled kids earning 6 figures (a myth deflated early on by Washtech), when most of us were dependable workers who never earned more than a middle class salary. Two things are happening that might change people's minds, though: articles about respected economists fearing that 30-40 million highly skilled jobs, NOT just IT, could vanish overseas in as little as a decade, and the rising labor costs and exchange rates in our competitor nations: http://finance.yahoo.com/currency/convert?amt=1&from=USD&to=INR&submit=Convert

Do not cower to the "God-given right" speech. Some like to pretend that Americans have an "entitlement issue", especially when it fits their cause. I have heard that before.

What I do know is that Americans are smart and have an incredible capacity to cooperate and work hard for their own good, and for the common good. American high tech workers have worked hard to achieve a standard of living in which they can live comfortably (not extravagantly) on middle class salary. Some people call that living wages. We want that for the rest of world as well, but not at our expense.

Anti American corporations need to be called what they are "anti-American" out loud. They do respond to public pressure and loss of business, so let them know you could never do business with a company like them, and don't. The main thing is to tell them and tell all your friends.

Over and over again, until they hear it.

Hi, this is from a former H1B, engineer, highly experienced and educated profissional in the US:

First of all, there is a nuance here that I would like to clarify:
It may be true that H1B work for the "same" salary when compared to an American worker. However, the major difference here is again a nuance that many of you fail to notice. H1B's are normally under pressure to perform and/or many H1B's come to the US hungry to prove their talent and win, therefore H1B's tend to work longer hour than other co-workers who do not rely on visas.

Regarding your views on former HP CEO Fiorina, her thoughts are very consistent with the business need;
Employers will find a way to export jobs anywhere that can be done at a decent enough quality and at a much cheaper rate.

The way I see it, is that you cannot control that. The only thing though, is that since the tendency is that every single possible 'offshoreable' job will be shipped overseas and you cannot do much about it, at least we should minimize and greatly control of the influx of foreign professionals who get in. If we do not, then we will have naturally more supply of people and salaries will be driven down further. Now one can say, too bad, salaries down are the reality now for IT professionals.

Then I ask, how much are CEO's, CIO's and other CxO making? Record profits, many times millions of dollars a year. That tells me that yes, they should increase salaries for their respective workers instead of looking forward to maximizing profits at the expense of cheap foreign workers and Americans even further.

I am one of the many tens of thousands of HP employees laid off from HP (I am a 30 year veteran). When people at HP get laid off, their workload gets dumped on the suckers remaing behind. Many of our jobs (I was an IT system manager) are off to India, Costa Rico and someplace in Eastern Europe. Company morale is in the toilet. How sad that a once great company is now degenerated into this. The CEO (Mark Hurd) made over $40 million last year. The VP of IT, Randy Mott (my ultimate boss) made over $23 million. The outsourcing isn't really going all that well according to my former HP friends.

I am a former HP employee and I can assure you that Carly F. was totally unloved while she reigned at HP. She made $188 million during the six years she worked there. When she left, the stock had dropped by 1/3 compared to what it was when she started. I guess those at the top are well rewarded for general incompetence. Morale at HP also was shot. I was watching 60 minutes and Carly was on the screen complaining about "the old boys club" at HP. The woman was both CEO and chairman of the board, you don't get any more powerful than that. She also fired all the male VPs who were a potential replacment. That woman was nothing if not self serving. Everyone at HP cheered when she got the boot.