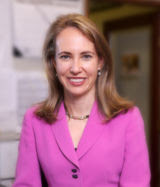 It is well documented that qualified U.S. workers are being displaced by H-1b workers, even at the current cap of 65,000. See the testimonials at HireAmericansFirst.org, for example.

According to the March 19th InfoWorld article "Bill would double cap on H-1B visas," she introduced the bill just one day after Bill Gates had testified before Congress - and no representatives of U.S. workers were invited to rebut Gates:

The Innovation Employment Act, introduced by Rep. Gabrielle Giffords, an Arizona Democrat, late Thursday, would increase the cap in H-1B visas from 65,000 a year to 130,000 a year... Giffords sees the importance of H-1Bs because Southern Arizona has been growing as a hub for tech companies, Karamargin added. "There's a need to stay competitive and keep the momentum growing," he added. "That means making sure the talent is available to drive the local and national tech economy."

In my voicemail I asked C.J., roughly:

Can you name just two tech companies in Southern Arizona that cannot find qualified American tech workers, and failed to get H-1b workers to fill those positions due to the current H-1b cap or lottery?

According to Arizona Central CareerBuilder job search, there are 832 IT positions advertised. But there are also 1840 sales and marketing ads, and 2680 healthcare ads. So how did Rep. Giffords determine that IT workers rather than healthcare, sales, and marketing workers are what are needed to keep Arizona's economy strong?

The InfoWorld article states, "The bill would prohibit companies from hiring H-1B workers, then outsourcing them to other companies, he said. H-1B opponents have complained that outsourcing companies are among the top users of H-1B visas." Can you please show us in the bill where the top users of H-1b "InfoSys, TCS, Wipro..." would be limited in their use of H-1b? We can't find any such language.

Why didn't Rep. Giffords arrange to hear from the U.S. IT workers who will be impacted by her bill before submitting it? Does she care more about the profits of multi-national corporations than about assuring that U.S. citizens have priority for U.S. jobs?