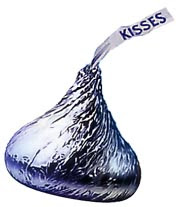 Providing further evidence that offshoring is driven by lower wages rather than a shortage of labor in the U.S., Hershey plans to lay off 600 Americans at the company's only West Coast facility in Oakdale California, and transfer the manufacturing of Kisses, Reese's, Mounds, Almond Joy and such to a new facility in Monterrey Mexico.

Chief Operating Officer David J. West claims that "Oakdale manufacturing will transfer to the new Monterrey plant. If the 40 year old Oakdale plant was only running at 40% capacity, why did Hershey invest in a new plant in the first place?

These 600 Americans can blame the NAFTA "giant sucking sound" that Ross Perot warned of for their plight, but can take comfort that, globalists assure us, the net result of shipping jobs to Mexico is the creation of even more and better jobs in the U.S. But only the $2/hour jobs driving Mexican trucks of candy back into the U.S. comes to mind.

Here in Canada Hershey also closed a local Hershey plant and unemployed hundreds of local workers (they were the biggest employers of that small town for the past couple of generations). Again the jobs were off to Mexico. Free trade and globalization suck big time. The average salary of ordinary employee has gone nowhere in the past 20 years. Guess what the average salary of the CEO has gone? Skyhigh. This is a disgraceful form of capitalism. There are plenty of small corner stores and universities calling for a boycott of Hershey products because of the shipping of jobs to Mexico (one of the most corrupt countries anywhere).

Hershey has stuck it to the American people.I cut them off my grocery list a long time ago

As an out of work developer myself who went from 6 figures to 27,000 on average, I can assure you that you are correct when you mention that we are NOT finding similar or better paying jobs.

I have added Hershey's to the Wall of Shame at http://www.KeepAmericaAtWork.com and I will say that I think the kettle is boiling on this subject, especially after my research uncovered that we did away with over 1,200,000 jobs from 2001 - 2007 paying an average of 96,000 each and replaced them with jobs paying 34,000.

As for myself, I have given up on ever getting another IT job as I no longer get interviews, so I'm starting a fix-it shop and hopefully I can make a living fixing lawnmowers and cars.

Best of luck to all of you,