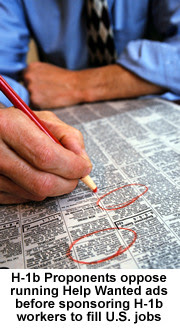 Senators Dick Durbin (D-IL) and Chuck Grassley (R-IA) introduced the “H-1B and L-1 Visa Fraud Prevention Abuse Prevention Act of 2007.” (S.1035) According to a bulletin by immigration attorney Greg Siskind, employers object to the time and expense of offering jobs to Americans:

"The chief objection to this usually relates to the details of the recruiting requirement and how this would significantly slow the process for bringing in a worker that may be needed immediately. Employers would have to advertise a position for 30 days before they could seek an H-1B approval."

H-1b proponents also object that the Durbin-Grassley bill would stem H-1b bodyshops. "This is seen as potentially very disruptive to the information technology sector..." writes Siskind. Rather than being hired for a specific job, H-1b bodyshops first secure H-1b workers, then they agressively apply for external job openings. Legally U.S. employers cannot give preference to Americans - even when several American applicants are clearly qualified for the job: If just one of the 100 H-1b resumes from H-1b bodyshops is "more qualified," by law, the employer must hire the H-1b, or be subject to a claim of "discrimination based on immigration status or national origin" - thus drumming up more business for AILA lawyers.

Currently the DOL and USCIS know of 130,000 U.S. job openings that will not be filled until October 2007. But these agencies will not disclose these jobs to U.S. workers. Instead they conspire against Americans by reserving these jobs for H-1b workers. The Durin-Grassley bill would require that DOL make post the job openings represented by H-1b applications on their website for 30 days, giving Americans the opportunity to inquire about the positions.

Both AILA and H-1b employers are aware that qualified Americans are being displaced by H-1b workers. And their opposition to the basic protections in the Durbin-Grassley reveal their true motive of keeping it that way.

This "we don't have the time to hire American workers" posture goes far beyond any legitimate claim of a labor shortage. Congress should act in the interests of American workers and co-sponsor the Durbin-Grassley protections.
Posted by Mr. Kim Berry at 10:15 AM

I don't have time to comment in depth on your posts and your stance against H-1B workers. I, however, read your brief online about how the H-1B visa is unconstitutional. Clearly, you've never been to law school or taken a class in constitutional law. Did you learn about the terms "substantive due process", "equal protection" and "privileges and immunities" from Wikipedia? I suggest that for everyone's sakes, you stay out of things that you don't know very much about.

What school are you attending?

Mr. Law Student, you seem to be unaware that the H-1B Visa program has adversely affected hundreds of thousands of American Technology Workers who have been denied Equal Employment Opportunities. Technology companies (nor their staffing companies) advertise jobs to the available local talent pool of candidates.

Just look in the news paper section under engineering… hardly anything there. Go online to CareerBuilder or Monster and search for a Software Engineering or Electrical Engineering position. Tell me… what do you see? What you see for the most part is third parties advertising 3 month contract jobs. This technique is well known for its intent and purpose… to discriminate and deny and deprive Equal Employment Opportunities to qualified local candidates. To learn more, just go and read the Age Discrimination in Employment Act of 1967.

Also view “The Wirtz Report” http://edocket.access.gpo.gov/2006/E6-13138.htm
Which recognizes the high rates of unemployment among older workers in the USA.

The law of the land is still Equal Employment Opportunity the last time I checked.

(1) Legitimate(recruiting) criteria, meaning criteria which are legally cognizable and not violative of any applicable laws

(e.g., employer may not use age, sex, race or national origin as selection criteria);.

(as described in paragraphs (a) through (h) of this section), the employer is required to have offered the job to any U.S. worker
who applies and is equally or better qualified for the job than the H-1B nonimmigrant (see 8 U.S.C. 1182(n)(1)(G)(i)(II)); this requirement is enforced by the Department of Justice (see 8 U.S.C. 1182(n)(5); 20 CFR 655.705(c)).
Civil Rights Complaints… Failure to Hire based on Age and National Origin… may be filed at state level Departments of Human Rights, ex: http://www.state.il.us/dhr and
· The Federal EEOC http://www.eeoc.gov and
· The Department of Justice, Civil Rights Division, Office of Special Counsel for Immigration-Related Unfair Employment Practices http://www.usdoj.gov/crt/osc

It is also discrimination when job advertisements recruit H-1B or based on Nationality and violators Shall be reported to the DOJ-OSC http://www.usdoj.gov/crt/osc/pdf/engfrm.pdf

I think corporate America is gambling… thinking they’ll be lucky when they go before the juries.

The argument is laid out here:

Can you give us a hint where it falls apart?

a) H-1B legislation violates the substantive due process liberty and property of American citizens by permitting employers to displace and replace American workers, and hire nonimmigrants when qualified American workers are available

It seems business wants to keep these job openings secret. What are they trying to hide?

"... significantly slow the process for bringing in a worker that may be needed immediately ..."

If the need to fill the job opening was immediate then business should WANT to post the job opening to find qualified Americans. Then they wouldn't have to wait until October 2007.

If there are 85,000 LCAs filed in 2007 (actually there were many more) for jobs on American soil, but the jobs were never advertized where an American could see the opening and apply (which almost none are), then those jobs are effectively reserved for a given class of people - foreign workers as opposed to Americans. Imagine reserving that many jobs for white applicants, or Catholic applicants, or female applicants and barring others from even applying? Lawyers would be dancing in the street, singing, "cha-ching"!

I wonder what Mister Law Student would think if lawyer's jobs were included in H-1B? Would he still be defending the program if he was the one who threw away tens of thousands of dollars and four years' of his life to get a degree in a field where there were no jobs left for Americans? Or if he was paid $40,000/year because of an artificially-induced labor glut in the law field?

Until Law Student passes the bar and has a few years under his belt, I don't think his view is any more credible than ours. I would also point out that Constitutional law is highly subjective. The Supreme Court has reversed its own opinions many times. Since they are political appointees, I question their opinions.

The Supreme Court is the weakest link in our democracy. Not that they are bad people, but if they all died (say in a coup or terrorist attack) a single president would replace them all. Their political agenda would be rule of law for generations.

I'd like to see an amendment to the Constitution where we elect members of the Supreme Court. That is the most democratic way of governing.

I wonder what Mister Law Student would think if lawyer's jobs were included in H-1B?

Lawyer's jobs are included in H-1B. I know at least three lawyers who are H-1B nonimmigrants.

Simple fact: Most nonimmigrant tech workers work three times as hard and whine a third as much.

Maybe you should move to their countries and take their jobs. Only fair.

You think it would be as easy to go work in India as it is for them to come to the US?

Unless you're going to go teach English, you've got a couple million bucks to invest, or you're being sent there by an organization that does, you're not going to have an easy time getting a work visa in most countries.

Wow! This only confirms how corrupt the H1-B System as become and how the Americans are place at a huge disadvantage!

In order to bring some equity back to the American tax paying workers, we at Peningo Systems would like to propose the following:

- Any company that hires an H1-B or L-1 Visa to work in the United States must pay a tax that is equal to 100% of the “Employer and Employee” portion of the Social Security and Medicare tax. This is important, since it takes away one of the “MAIN” incentives to fire an “AMERICAN WORKER” and replace them with an H1-B or L-1 Visa. As it is all H1-B and their employers ARE EXEMPT FROM PAYING SOCIAL SECURITY AND MEDICARE TAX! This practice must stop.

- To combat the abuse of low pay to H1-B and L-1 Visa holder to under cut the American based worker, which is a violation of the letter of the law, the Federal government must come up with a “Up To Date” Salary survey that would accurately reflect what an American actually would get in the free market place. Then the H1-B or L-1 Visa holder MUST be paid in the UPPER 10% of the Salary range...that's right.... the H1-B MUST be paid in the UPPER 10% of the Salary range. This would insure that H1-B are treated in terms of cost the same as an American and that the H1-B is truly a talent that is needed!

If we implement these 2 proposals, then the H-1B would compete with an American based on the merits of his/her abilities and not solely based on the fact that the H1-B is 10s of thousands of dollars cheaper than the American.

This is a fair way to bring equity back into the US as well as protect out Tax Base from the Tax Evading scheme of hiring foreign workers and avoid paying for Social Security and Medicare tax.

If you have time, please check out my Blog at Peningo Opinion Blog