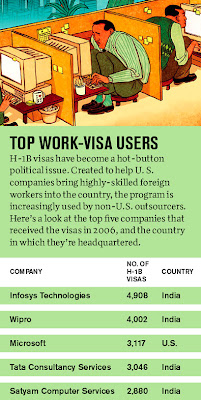 Listening to Compete America one would think that H-1b workers are the "best and brightest" in the world, contributing to "U.S. global competiveness." But as the 1/31/08 BusinessWeek article "Are H-1B Workers Getting Bilked?" exposes, H-1b are being used by Indian consulting firms to bring in cheap labor, driving American consulting firms out of business, and displacing highly-skilled U.S. workers.

First, Indian consulting firm Patni undercut American workers when DOL approved the labor condition applications for a "prevailing wage" of $44,000 per year. This is far below the "$45 to $80 per hour" that the Yoh study found to be the average for U.S. workers with "high demand" skills, such as "Database Administrator" and "Application Developer."

As State Farm in Bloomington Illinois was laying off their American staff, the LCA Database reveals that Patni Computer Systems was bringing in hundreds of Indians on H-1b visas - many placed at State Farm. As mandated by the U.S. Congress, the Department of Labor rubber-stamped these LCAs (labor condition applications) for wages as low as $27,000 for computer programmers. H-1b workers must have a minimum of a BS degree and specialized skills.

Among the Americans who lost their jobs was George Moraetes. He reports having "seen 4 - 5 H1-b's living in a one bedroom apartment" and that the same pattern of H-1b usage was employed by GE.

Contrary to helping the U.S. remain "globally competitive," the top users of the H-1b program are Indian consulting firms. They are transferring U.S. jobs and technology back to India and increasing the U.S. trade deficit. Without the H-1b and L-1 visa programs much of this loss of U.S. tech leadership would not be possible.

The U.S. Congress needs to wake up to the imminent threat posed to the U.S. economy by shipping our manufacturing to China and now services to India. Or economy cannot sustain this growing trade deficit and gutting of U.S. infrastructure.

Flaws in University of Buffalo Spectrum's call for H-1b increase

The original article is here:

This is an image of the front page where it run in the printed edition.

ARTICLE: "Companies are very welcoming to international students because they can pay them less money than the local workers, even if their ability is equal," said Ping Lu, a sophomore management major from China

FACT: Industry would dispute this, claiming that H-1b has a "prevailing wage" requirement. We thank Ping for setting the record straight: H-1b workers are often preferred because they are willing to work cheaper for the opportunity to stay in the USA - and the "prevailing wage" is a sham.

ARTICLE: Henry Mok, a Malaysian student who graduated from UB with a B.S. in electrical engineering, applied to at least 80 jobs during his OPT in the Buffalo area. With only a few interviews and no job offers, Mok spent his summer perfecting his fishing skills at a friend's farm rather than his engineering expertise.

FACT: U.S. graduates are facing a similar job market. Mok's inability to find a job after sending 80 resumes refutes claims by industry that the H-1b cap needs to be raised to solve a labor shortage.

ARTICLE: Employers, in addition to being required by law to pay the fees, have to prove that they could not find any better qualified domestic workers instead.

FACT: The H-1b has no such requirement. Employers can overlook a stack of resumes from more qualified U.S. applicants and hire the H-1b worker instead. The impact on U.S. workers is evident at:

ARTICLE: The final step is to apply for the visa by April 1 - the first day applications are accepted. Students with a bachelor's degree are competing with over 100,000 others for an allotment of 45,000 visas.